Changes which have taken place over the last twenty years in engine performance (in terms of improved fuel consumption, higher operating temperatures and pressures) and maintenance practices have resulted in increased severity in lubricant operating conditions.

AeroShell Turbine Oil 560 was developed to withstand the hostile environments of today’s high powered, high compression engines in which the older generation of oils can be stressed up to and beyond their thermal limits, as evidenced by oil coking in the high temperature bearing areas.

In order for military authorities to take advantage of this better performance in military engines the specification MIL-PRF-23699 was re-written to include a ‘High Thermal Stability’ (HTS) grade as well as the Standard (STD) and Corrosion Inhibited (C/I) grades. AeroShell Turbine Oil 560 is fully approved as an HTS oil. With the advent of the new civil turbine oil specification, SAE AS5780, which has more stringent requirements than the military specification, AeroShell Turbine Oil 560 was approved as a SPC (Standard Performance Capability) oil.

With effect from January 1st 2002, AeroShell Turbine Oil 560 has been manufactured with an improved formulation to further enhance its anti-coking performance.

AeroShell Turbine Oil 560 contains a synthetic ester oil and should not be used in contact with incompatible seal materials and it also affects some paints and plastics. 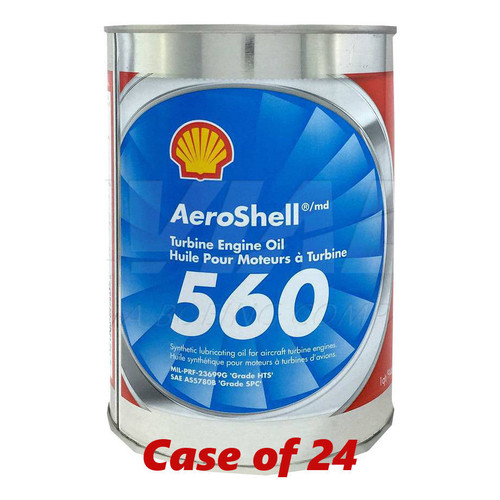